Xbox 360, PlayStation 3, PlayStation 4, PC
Star Ocean: The Last Hope (スターオーシャン４ザラストホープ, Sutā Ōshan Fō Za Rasuto Hōpu?) is the fourth installment of the Star Ocean main series, initially released for the Xbox 360. Centered around Edge Maverick and Reimi Saionji, the game features more of a sci-fi emphasis than past titles and includes the ability to control the SRF-003 Calnus. The game takes place a few centuries before the original Star Ocean, around S.D. 10, or 2097 A.D.

The game uses the same real-time battle system as previous games in the series, although with variations. This installment returns to having a four player fighting party, but includes the "Real Time Member Change" that allows switching active party members for reserves during battle.

In addition to support skills, physical-oriented character can make use of special arts, while spell-oriented characters cast symbols to damage an enemy. Link Combos can be created by chaining abilities together. Both ability types require MP to perform in battle, and through usage of SP, their level increases and get much stronger and damaging.

The main new feature in battle is the Rush Mode. Each team member can unleash special or preemptive attacks by building up their Rush gauges during normal attacks. Other features include Jumping, and the Blindside system in which the player can evade an enemy's attack and dash behind them, leaving the enemy open to a counterattack by leaving their line of sight. The BEAT System allows the player to enhance active team members' preferred fighting styles through stat bonuses. As combat experience increases, the team can achieve higher BEAT bonuses and unlock Action Upgrades. Whenever the party battles, the Battle Bonus Board will start accumulating colored jewels as rewards for accomplishing various skills, and gives bonuses at the end of an encounter.

When players engages enemies out in the field, three types of encounters will occur:

On the field, there are several command skills for varied purposes. For example, Edge has a dash skill which lets the player run faster, Bacchus can mine ores and minerals at mining spots, and Reimi can harvest cooking ingredients and other consumable items from harvest points.

The traditional Item Creation (IC) returns. The player can create weapons, healing items and accessories for use. Raw materials can commonly be found in shops, while rarer and uncommon types can be found in combat fields. This game's version has a new feature called "Recipe Creation Conference", in which team members can be gathered in discussion about creating an item, but the final product's characteristics will vary due to the characters involved. The recurring character Welch Vineyard returns in this game, and is in charge of fulfilling IC requests from the player. There is also the Synthesis feature to boost equipment factors.

A first in the series, the player takes the full control of their spacecraft, the SRF-003 Calnus, which can be piloted to various planets throughout the game and which can be upgraded. It also hass a conference room where the crew gathers to come out with new ideas for Item Creation. The battle arena contains the battle simulator, which allows the player and his teammates to practice combat. The crew's quarters allows the player to choose which characters share the same room, and the correct pairings can lead to Private Actions.

The Last Hope starts on Earth in the year S.D. 10, a time when the world is on the brink of destruction. In A.D. 2064, World War III broke out after several clashes between the World Republic Federation, the ruling government body on Earth, and its enemies around the world. Weapons of mass destruction were utilized by both factions without hesitation, razing the land. The situation lead the people to believe that the end was near, but the critical situation forced both factions to declare a ceasefire. In the aftermath, most of the Earth's population had been killed and the natural environment was deteriorating at an alarming rate.

The surviving population were forced to live confined in underground cities and the new country alliance, the Greater United Nations. It established the Universal Science and Technology Administration (USTA), its mission was to locate a new home planet for mankind in the far reaches of outer space. In A.D. 2087, Professor Trillas Bachtein succeeded in his warp drive experiment, a new method of space travel. Thus, in S.D. 0001, the first year of the newly established Spacedate calendar, the USTA secretly put in motion its Space Reconnaissance Force (SRF) project. Nine years later, it is about to send the first human expedition into outer space, which childhood friends Edge Maverick and Reimi Saionji volunteer for.

PlayStation Plus members and STEAM users who purchased the game up until December 12, 2017, received an exclusive downloadable mini-soundtrack featuring music from the game.

Star Ocean: The Last Hope was originally announced at the "Star Ocean Special Stage" at the 2007 Square Enix Party as the tentatively titled Star Ocean 4 with no platform.[1] Its release for Xbox 360 was revealed during the 2008 Xbox 360 RPG Premiere. In an interview with Xbox Japan, weeks before the game's release, producer Yoshinori Yamagishi revealed that the team began planning out The Last Hope immediately after they finished developing Star Ocean: Till the End of Time, so actual development time took about 5 years.

The game uses an improved version of the game engine used in Infinite Undiscovery, now able to generate much better graphics, and the expression of light in real time. The biggest problem the team encountered while creating the game was capacity, as RPGs require vast amounts of data and coding thanks to the complexity of graphics and animations. Pre-rendered movies were done by a collaboration between tri-Ace and Visual Works, while character design and illustrations were handled by Katsumi Enami, of Baccano! fame.[2][3]

After several statements that left a release on the PlayStation 3 up in the air,[7][8][9][10] on September 14, 2009, Star Ocean: The Last Hope International was announced in the Japanese gaming magazine Famitsu. The title would be released exclusively for the PlayStation 3 including new content that was not included in the original Xbox 360 version, finally putting an end to the many port rumors.[11] It was released in February 2010 on a single Blu-ray Disc, and contains additional content, such as dual voices (Japanese and English), original illustrated character portraits for dialogues, and several new soundtracks.

Star Ocean: The Last Hope 4K & Full HD Remaster was released digitally on November 28, 2017 for the PlayStation 4 and STEAM. Developed in partnership with tri-Ace, it is a full HD remaster of the International version, with added 4K (PS4 Pro) support and PC keyboard, mouse, and controller support. The remastered title keeps the original deep Item Creation, Private Action, and Blindside battle systems. Those who purchased the game from the PlayStation Store before January 8, 2018, received an exclusive PlayStation 4 theme and twelve PlayStation Network avatars featuring the main characters. 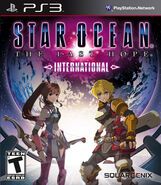 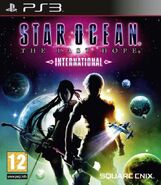