View source
watch 01:00
'Star Ocean: Anamnesis' - 2B Trailer
Do you like this video?
Play Sound

iOS, Android
Star Ocean: Anamnesis (スターオーシャン：アナムネシス, Sutā Ōshan Anamuneshisu?) is a mobile phone game developed by tri-Ace. It was created in celebration of the Star Ocean series' twentieth anniversary, and features characters from all previous titles in the franchise, as well as music from series composer Motoi Sakuraba.

It received a novelization based on the first episode, Star Ocean: Anamnesis -The Beacon of Hope-, which was written by Satoshi Wagahara. A companion manga for the second episode, -Twin Eclipse-, was also written by Wagahara and illustrated by Yukihiro Kajimoto.

Due to lower-than-expected interest, Square Enix has closed service for the Global version as of November 5, 2019. As of June 24th, 2021, the Japanese service also closed. An offline version of the game is available with the first 3 episodes and acquired character models, but only a limited number of collaboration characters are be available.

Star Ocean: Anamnesis is a mission-based tactical battler that features full 3D real-time action battles with high-definition graphics. The game has three objectives overall: to explore by taking on missions, to earn rewards through battles, and to enhance characters and weapons by winning rewards. Players are encouraged to log in everyday to recieve their Login Bonus rewards, claimed via the Gift Box.

In battle, a character moves by holding one's finger anywhere on the screen to make him/her move in that direction. Tapping anywhere makes the character approach the enemy and initiate a normal attack; tapping repeatedly results in multiple normal attacks. Battle skills—special arts and symbology—cost Ability Points (AP), which recover whenever the character stops moving or hits the enemy with a normal attack. Rush Modes are battle skills that can only be performed once the Rush gauge is filled up. Cancel Bonus boosts damage output. Characters can evade (by swiping, which costs AP), guard (when standing), or swiftly assault the enemy. One can change targets by tapping a different enemy or the Target icon on the right side of the screen, while changing characters can be done by tapping their face icon at the bottom of the screen. The player must be aware of status ailments, the beneficial "Elements Burst" and element advantages. The Order and Assist systems provide support.

Battles require Stamina Points to be played. The amount of SP required differs by mission. After usage, the bar recovers at a rate of 1 SP per three minutes. In overheat state (when the bar has more SP than the maximum allowed), it does not recover over time. The player's maximum SP is dictated by their rank—and when one's rank goes up, the SP bar is filled. In turn, a player's rank can be increased via Exploration Points (EP), earned by doing missions alongside EXP, FOL and gems. Gems, which can be purchased by spending real world money, are the gacha currency and allow the player to summon characters and weapons.

All playable characters can equip one weapon type and one accessory, and possess unique sets of talents, battle skills and stats. They are divided into five defined roles—Attackers, Defenders, Sharpshooters, Invokers, Healers. Each role has its particular advantages and disadvantages, but party combinations are near-limitless. Weapons and accessories, too, must be chosen wisely due to their factors or elemental attribute. Enhancements are done via Limit Break, Augmentation, Transmutation, and Weapon Customization.

In addition to the original Anamnesis cast, players can summon characters from all the previous Star Ocean games: from Star Ocean, Star Ocean: The Second Story, Star Ocean: Till the End of Time, Star Ocean: The Last Hope and Star Ocean: Integrity and Faithlessness. There are also guest characters, available for a limited time, from collaborations with other franchises such as Final Fantasy, NieR: Automata, and Valkyrie Profile, among others. As new and stronger units are released over time, old units become outdated, thus the Awakening feature was implemented. By using materials obtained in Deep Space Exploration, the player upgrades older units of their choice to varying effects.

The aforementioned explorations are found in the Game Cycle Area, which is near the bottom of the game's home screen. It also contains the "Events", "Missions" (where the game's main story scenario can be accessed), and "Maze of Tribulations" buttons, along with the Interactive Mode of the Friendship system. The player can also earn a number of titles and achievements.

Set in Space Date 539 (A.D 2625), the player controls the captain of the Pangalactic Federation starship GFSS-3214F, which is exploring deep space two years after the events of Star Ocean: Integrity and Faithlessness. After a surprise attack by pirates, the entire crew leaves the vessel in escape pods while the captain stays on board with only the AI robot Coro. Making the decision to activate the ship's hyperspace drive, the warp fails and ends up sending them to a distant region of space outside the Federation's borders.

While investigating a seemingly barren planet, they happen upon a mysterious woman being chased by a monster. The woman, Evelysse, uses a powerful form of symbology that allows her to summon warriors from throughout time, and manages to escape with the aid of her time-warped allies. After she joins the captain back on the ship, the course is set to return home to the incredibly-distant Earth.

The main characters of Star Ocean: Anamnesis are the Captain and Evelysse. Characters from previous Star Ocean games appear in the game with HD models and designs illustrated by several artists.

Motoi Sakuraba, the series' long-time composer, returned to create new tracks for the game, which have been collected into the Star Ocean: Anamnesis Original Soundtrack, released on March 13, 2019. It includes a set of idol songs for the Milky Stars members: Miki's "Sweet Tips", Reimi's "ami d'enfance", Verda's "Unknown Star Blink", Sophia's "Love Connection", and Evelysse's "My Own Starlight".

Series producer Shuichi Kobayashi felt that it was a waste to see the IP that is Star Ocean remain dormant, so he decided to decided to step up to the task and take over from Yoshinori Yamagishi. While Star Ocean: Integrity and Faithlessness did not meet its sales expectations (which Kobayashi had expected), from the very start he had no intention to stop right there. From a resource management perspective, customizing and recycling assets from Integrity and Faithlessness was advantageous. Its game engine, character model data, backgrounds, and other texture data were reused in the early development of Anamnesis, thus making a "sequel" with less expense and time. If Star Ocean's popularity continues, and there is enough demand from fans, Kobayashi hopes to be able to do the next thing for the series.[1]

According to producer Takaaki Kai, Anamnesis was conceived almost like as a festival, a game for fans to be able to enjoy the characters interacting and going on adventures together,[2] and is intended to keep true to the spirit of those of the console games.[3] While a lot of illustrators are involved in the project, Akira "akiman" Yasuda (who was the character designer for Integrity and Faithlessness) handled Evelysse's design[2] and was able to do the key visual of her, Coro and the past protagonists: he made sure they all fit together in the same world and to emphasize each character's personality from the way that they looked.[4]

For the Global version, Square Enix opened a pre-registration campaign[when?]. If it achieved over 100,000 registrations, a Valkyrie Profile character would join the game, and if it achieved over 200,000, Welch would join the game. As of July 14, 2018, all goals were met and all prizes awarded.[5] There weren't any major changes between the two, though important QoL changes were available since launch on the Global release. Other updates were also brought over quicker for the global release, and it included both English and Japanese voices as options.[3]

While the Global game performed well in its first year, an undisclosed internal review process found that the Global release was not meeting expectations; and on August 5, 2019, the development team gave notice that service would end on November 5, 2019.[6] Although closure was expected to occur at 9:00 PM Pacific Standard Time (0500 6 November 2019 UTC), many users reported not being able to log in as the game clock rolled over earlier in the day. Developers left a parting post on all social media feeds as of 5:00 PM PST (0100 UTC), once again thanking users for their patronage.

For its part, the Japanese release has seen a second season, or Episode 2, titled -Twin Eclipse- (スターオーシャン：アナムネシス -ＴｗｉｎＥｃｌｉｐｓｅ-?). According to Kobayashi, the team prepared about ten times the volume of Season 1 for the second season. In addition to a fully-voiced scenario with animated scenes, it has new tracks by composer Motoi Sakuraba.[7]

Series recurring character Welch Vineyard appears as a key character for the season, and heralds the Weapon Customization feature to improve weapons. The Order and Assist systems, as well as Friendships based on the series-recurring Affection Ratings, were implemented throughout the episode's duration. It was released on Japan in Summer 2018.[7] 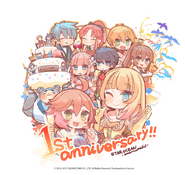 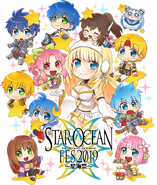