Star Ocean Wiki
Register
Don't have an account?
Sign In
Advertisement
in: Articles to be expanded, Locations in Star Ocean: Anamnesis

The Riven Ring is a large belt of debris that contains the wreckage of many ships. As in other areas with a high concentration of debris, the Ring is inhabited by stropers, vigorous creatures that evolved within these belts and live by consuming rubble from the boulders and metals present, and which have a high reproduction rates.

In S.D. 539, Coro disengages the GFSS-3214F's warp drive after the sensors pick up on the ring's presence up ahead. Once the ship stops, Coro explains to the captain and Evelysse that, with their current sensors, he cannot see where the belt ends so they cannot take a detour. The captain suggests that Coro navigates his way through the debris, even though the odds are against them. Evelysse, too, trusts Coro to do it—reminding Coro that they made it through space without any shields before.

With their lives on the line, Coro does as told and steers the ship through the debris. Coro also picks up a pulse up ahead, and warns that stropers might target the ship next. The captain and Evelysse defend the ship. Coro also locates the wreckage of a Purge defense ship containing a pulse tower energy unit, which they decide to investigate. Evelysse finds the captain's logbook; although corrupted, it once again mentions Operation: Frost. Afterwards, Coro locates Purge transport ship but it doesn't have new information. Coro later locates another, but much less damaged this time.

They find a pulse tower counter-jamming device and a control unit; after connecting it to the Quad Scanner, Coro is able to extract information regarding the Levarance language, which may allow him to analyze the data they obtained on Maere. As they are about to leave, a creature-controlled meteoroid starts pursuing the ship. The captain instructs Coro to steer the ship next to the meteoroid, so that they can jump and kill the creature. After they do so, they are able to get out of the belt. Coro informs that he analyzed the data, which contains some details about the Levarance's CS plan. They then depart for the next star system: Berbent. 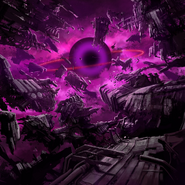