Tomokazu Sugita
Ricardo Franz (リカルド・フランツ, Rikarudo Furantsu?), initially known as the Masked Man (仮面の男, Kamen no Otoko?), is a main character in Star Ocean: Anamnesis's second episode, titled -Twin Eclipse-. The party meets him while on Daphtine during the search for Tika Blunche's parents, but they are not sure if he is friend or foe.

Wearing a dark grey and blue suit of armor, Ricardo has braided white hair and violet eyes hidden behind a black visor. Ricardo is an extremely serious man who, while generally self-possessed and having a keen insight that earned a high position in the Rubalican army, has an irritable temper.

He also values his younger sister, and family, more than anything else, but given the long time they have been apart, Ricardo doesn't know how to treat her and is rather clumsy as a result.

Ricardo is an optional playable character in Star Ocean: Anamnesis, and currently has two variants: the standard "Ricardo", and "Artillery Ricardo". In his base variant, he is a Defender who uses great swords and has quite an independent talent set as well as a good damage output. 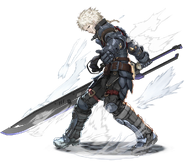 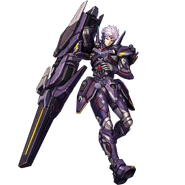 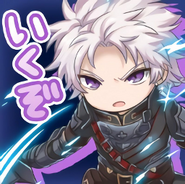 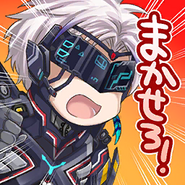 Ricardo in the manga.

In The Leash Code key art. 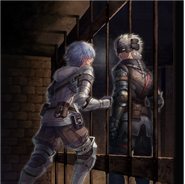