Why does this have to be my fate?

Mavelle Froesson (マーヴェル・フローズン, Māveru Furōzun?, lit. Marvel Frozen[1]/Flozen[2]) is one of the main characters of the first Star Ocean as well as its remake, Star Ocean: First Departure. A mysterious woman who wields orbs in battle, she seeks revenge on the Crimson Shield for killing her parents.

Mavelle
Birthplace: Planet Roak
Birthday: March 5th, 27 S.D.
A young lady who played a part in the war between the federation and planet Fargett's Jie Revorse in the 340s (S.D.).
Mavelle's parents were killed when she was young and she was separated from her brother. She had long been consumed by thoughts of revenge, until she met Roddick and his friends, who have given her the strength to embrace her true destiny.
She is currently travelling with Ioshua who, similar to her, has lost contact with his sister. Mavelle has been helping him in his quest to find her.

Mavelle is a beautiful and mysterious woman whose path crossed with Millie Chliette and Ronyx J. Kenny when they arrived to Roak in 46 S.D through the Time Gate on Styx. She first meets the party when they arrive to the town of Ionis, and tells them of her story: She had been attacked and captured by the Crimson Shield, who killed her family and sold her to an assassin guild. After this, the player can opt to recruit her or not.

In case Mavelle and Ioshua Jerand are recruited, the player will see a major scene at the Old Race Ruins. Here the player will find out that Mavelle is actually Erys Jerand, Ioshua's sister, who had exchanged her body for the body of a Muah female, in order to seek revenge from the Crimson Shield. She will then join her original, frozen body and shatter it along the icicle she resides in, killing herself. However, in First Departure, if the player has Ashlay Bernbeldt in the party in addition to Ioshua and Mavelle, Mavelle becomes Erys once again.

Mavelle at first seems distant, solemn, and bent on revenge, but she eventually manages to achieve normal communication with others. When in Ioshua's presence, she seems rather uncomfortable as she is afraid to tell him that she is not who she seems. Her favorite food is Sole in Wine Sauce.

In a Private Action in Silvalant City with Erys, it is hinted that Mavelle is more than just a vessel, rather having both her own mind and Erys's while her soul inhabited her body. It is even hinted that Mavelle had a real name, even though the player never learns what it was.

In Star Ocean and Star Ocean: First Departure, Mavelle is a physical attacker who uses orbs as her weapon of choice. She can also equip cloth armor. She is an optional character, who can be recruited at Ionis, and will leave the party if Ioshua is recruited and the player visits a room in the Old Race Ruins. In First Departure, if Ashlay has also been recruited, Mavelle will still leave the party but Erys will join.

Mavelle also makes a playable appearance in Star Ocean: Anamnesis; here, however, she is classified as an Invoker and specializes in dealing Ice-elemental damage. 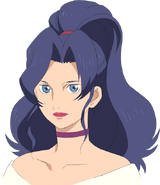 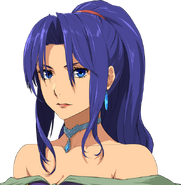 Portrait in First Departure R.
Add a photo to this gallery

Mavelle (SR).
Add a photo to this gallery 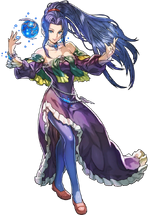 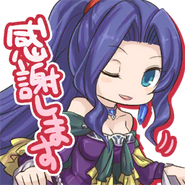 Stamp: "You have my thanks". 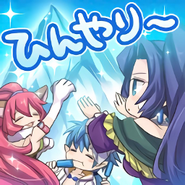 Mavelle model face view.
Add a photo to this gallery