Star Ocean/Star Ocean: First Departure
Kratus (クラトスの町, Kuratosu no machi?), historically known as Kraat (クラート村, Kurāto-mura?), is a small settlement on the southern half of the Muan Continent on planet Roak. At one point, the fruits picked in the village were sold at high prices all across the world.

It is the hometown of Roddick Farrence, Millie Chliette and Dorne Murtough, who defend the town from bandits and monsters as members of the Kratus Defense Force.

In S.D. 346, Roddick and Dorne are in the Defense Force HQ, when Dorne tries to talk to Roddick about his feelings for Millie. At that moment Millie arrives. As there isn't much to do, they go out on a patrol. On their return to HQ, bandits led by Baird attack the town. After defeating them, that night the trio has tea at Roddick's home. The morning after, the Captain gives them a gift from the townspeople, as well as a day off.

The trio is soon summoned by the Captain. Via letter, the Mayor of Coule asks the Defense Force to send help immediately; there is a mystery outbreak and the residents are suffering from high fever. Millie's father, Martoth, leaves to investigate. Two days later, the trio receives Martoth's letter telling them to stay away from disease-ridden Coule. Millie runs to see her father, and Roddick and Dorne follow. They take Millie back to Kratus after meeting with Martoth. That same night, she departs in search of the herbs of Mt. Metorx, accompanied by Dorne and Roddick.

They briefly return to Kratus when Dorne asks Captain Ronyx J. Kenny to lay him on his own bed as he is about be petrified due to the virus. Escorted by Ilia Silvestri, the trio is transported from the Calnus to Dorne's house. Dorne has Millie take his music box and Roddick vows to find the cure, and they immediately leave for Earth.

After jumping into the past through the Time Gate on Styx, Roddick and Ilia find themselves again at the small village in S.D. 46, but they discover that it is called Kraat. After realizing they have been separated from Ronyx and Millie, they begin searching for them after Roddick procures some Roakian clothing for Ilia. They soon move on to the town of Haute, called Coule in the future.

After joining with Millie, the party can recruit Pericci at Kraat, by interacting with a cat close to Millie on a Private Action event. If Roddick calls the cat Pericci and plays the Ocarina next to her, the cat will transform into her humanoid form.

After obtaining the antidote for the petrifying virus, they return to Kratus to heal Dorne and the population of Roak. 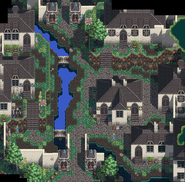 Ilia and Roddick in Kraat.
Add a photo to this gallery