Gems (紋章石, Monshōseki?, lit. Heraldic Stone) are the premium currency used in the gacha system featured in Star Ocean: Anamnesis, along with the non-premium FOL. It can be purchased with real world currency, and has many uses in-game.

Their main use is for the Draw system that allows players to summon playable characters and weapons (for which full Draws cost 5000 and 3000 gems, respectively). It is possible to restore Stamina to keep playing as well; each restore costs 100 gems and adds Stamina points equal to the current total, dictated by the player's Rank. Players can also expand their follow and inventory slots by five with 100 gems (until a maximum quantity of 300 and 500 slots, respectively), or purchase special items and boxes that contain rare materials and other items at the Item Shop screen.

If all party members are incapacitated during battle, the player can use 100 gems to revive them to keep playing (which is called a Continue). In Multiplayer, only the host can choose to continue and revive all allies. This feature is not available on Misery 3 event missions and the Maze of Tribulations.

Beside purchasing them with real world currency, players can also acquire them as a Daily Login bonus, as an initial clear drop from missions (both in the story scenario or in timed events), or by exchanging 50 Maze Coins earned from the aforementioned Maze of Tribulations. 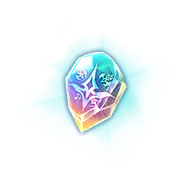 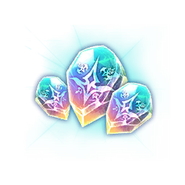 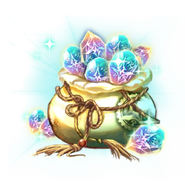