Star Ocean Wiki
Register
Don't have an account?
Sign In
Advertisement
in: Articles to be expanded, Locations in Star Ocean: Anamnesis, Planets

At least one metropolis

Its native name is unknown, so Coro named it "Farbrooke" due to locating some waterways a distance away from the GFSS-3214F's landing site.

According to Coro's scanners, there is at least one metropolis. The planet's population is a rather advanced one, as it has developed and is accostumed to spacecraft, but it also suffers from political strife: a rebel group, motivated by greed, is at war with the current administration.

Coming from the Esperance system, the GFSS-3214F arrives on orbit. Due to their technological level, Evelysse hopes to finally find parts for repairing the ship. They land far away from residential areas so that no one witnesses them touch down, but the ship coincidentally lands in front of guerrilla members who immediately attack the ship in search of loot. After fending them off, Coro intercepts their transmissions and learns that they are rebels. Evelysse gets angry at the guerrilla calling themselves 'rebels' seeing that they'd rather plunder helpless citizens than overthrow oppressive governments. Since she and the Captain will invariably take action, Coro simply asks that they respect the UP3 as best as they can.

Coro discovers a new rebel base under construction. The duo sneaks in, planning to disrupt their logistics, but they realize it is a signal-jamming tower. They begin to speculate when two rebels appear. Hidden, Evelysse and the captain hear their conversation: the tower emits electromagnetic waves that change the rock below into a precious metal, which their client needs as an energy source and pays for its mining. Evelysse thinks a representative of the "client" must be there overseeing the tower's construction.

They recover documents detailing the raid on the nearby city with the rendezvous point included. The captain and Evelysse intercept them in an ambush; from the raid leader, they recover a map that delineates three points of operation and the routes connecting them. The first was where the raid would take place, the second is the tower, and the third is their headquarters, roughly equidistant from the first two. After Coro's analysis of the base, they attack it and the rebels surrender. However, a man approaches them and claims they are a mere nuisance and will be dealt with, after which he leaves. Evelysse tries to catch him but he gets away.

With the ship's sensors, Coro tracks the man and more rebel forces to a structure that houses spacecraft. Expecting them to cut their losses and flee off-world, the captain and Evelysse travel there at once and meet with the man again. He finally asks who they are and why they take umbrage with The Purge. Evelysse declares that he and his organization will pay for the crimes they committed, but he transports to a ship on orbit, content with knowing the captain and Evelysse's motives.

Due to the ship's precarious state, they cannot pursue the man's ship. Instead, they make way for Pasithee. Thanks to Coro's repairs using the spoils of battle, the GFSS-3214F can utilize mid-range transmissions once again: they can now reach the length of an average star system. 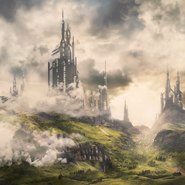