Mountainous with ruins scattered about, cliffs

Its true name is unknown by the crew, so Evelysse christened it "Esperance" and is registered as such in Coro's database.

According to Coro's sensors, there are a large group of man-made structures indicative of a metropolitan area. The number of life-forms occupying the city is disproportionately small compared to the scale of the metropolis, as the population is on the verge of extinction. Long-abandoned parts of the city have been overrun by vegetation. The people of Esperance have a higher level of civilization than those on Maere.

There is a large cavern just beneath the planet's surface, product of its resources being siphoned by a spaceborn civilization's large-scale mining operation.

The GFSS-3214F lands on Esperance in hopes of finding spare parts and materials with which to repair the battered ship, but also to investigate Coro's initial reports. As soon as they enter the planet's atmosphere, the short-range sensors quit responding, confirming their suspicions on the presence of the same illicit mining operation they found on Maere. They begin by surveying the city grounds to determine what caused the reduction in the local population; they also install a counter-jammer to restore the ship's sensors. At the survey area, the Captain and Evelysse defeat a plantlike creature and send a sample for Coro to examine.

The route through which they must continue their investigation is blocked by an enormous plant-based life-form, as the rest of the areas are all cliffs. Evelysse finds a detour by doing a bit of reconnaissance, the opening hidden in the tree's roots. She suspects it to have once been used as an expressway. Up ahead, there are numerous corpses of plant-based life-forms due to thornite attacks. They secure a sample of the beast.

Coro manages to track down the location of the pulse tower jamming their signals. The Captain and Evelysse remove its energy unit, restoring the short-range sensors. Once the duo is back aboard the ship, Coro tells what the thornite sample revealed as he has determined what caused Esperance's ecosystem to collapse. The creatures' DNA are all perfect matches, that is, while it appears they are fighting many different organisms, in actuality they are all one organism (in simpler words, "clones of the same self-replicating life-form"). The Captain and Evelysse kill the parent source. Back on orbit, as the planet no longer has to worry about the thornites' abnormal replication, Coro believes the population will recover. Suspecting those who left the tower to be responsible for the thornites, they leave the star system and go to Farbrooke.

Clearing mission 2-31 "Who Is Responsible?" unlocks the Augmentation feature, found in the Characters menu and which makes possible for characters to be upgraded to their next Rarity (i.e. a character can evolve from 5☆ to 6☆ rarity and unlock hidden battle skills and talents). Completing mission 2-31 earns the player the "Clear Chapter 2" title. 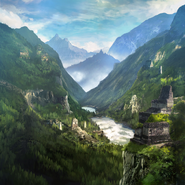