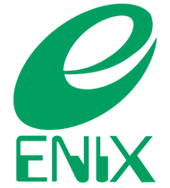 The Enix Corporation (株式会社エニックス, Kabushiki-gaisha Enikkusu) was a company that produced Japanese video games and manga. The company was founded by Yasuhiro Fukushima on September 22, 1975 as Eidansha Boshu Service Center (株式会社営団社募集サービスセンター, Kabushiki Gaisha Eidansha Boshū Sābisu Sentā) and renamed Enix in 1982. The name is a play on the words "Phoenix", a mythical bird that is reborn from its own ashes, and "ENIAC", the world's first digital computer.

Enix is perhaps best known for publishing the Dragon Quest series of console role-playing games, and others such as Star Ocean. The company merged with Square Co. in 2003 to become Square Enix.

Enix began its foray into the gaming market in 1982 by holding a personal computer game programming contest. One of the winners was Love Match Tennis, created by Yuuji Horii. It would go to become one of the company's first PC releases. Another winner was the puzzle game Door Door by Koichi Nakamura, which would become one of the company's better known home computer titles. The game was subsequently ported to the Nintendo Famicom, but never saw any form of release outside of Japan. Nakamura would stay on-board as one Enix's key programmers.

Over the next few years, Enix published several video games for various Japanese home computer systems. Rather than developing games within its own company, Enix would continue to outsource the production of its games to other developers through the use of royalties. Enix is perhaps most famous for publishing the Dragon Quest series of console games (released as Dragon Warrior in North America until 2005) developed by Chunsoft. Key members of the developer's staff consisted of director Koichi Nakamura, writer Yuuji Horii, artist Akira Toriyama, and composer Koichi Sugiyama, among others. The first game in the Famicom-based RPG series was released in 1986. The game would eventually sell 1.5 million copies in Japan and establish the company's most profitable franchise.

In 1991, Enix registered its stock with the Japan Securities Dealers Association, later known as JASDAQ. Enix soon began publishing manga from its shonen magazine Monthly Shōnen Gangan. The company established ties with more video game developers and would go on to publish several games for fourth, fifth, and sixth generation game consoles. Despite the announcement that Enix's long-time competitor Square Co., Ltd. would develop exclusively for Sony PlayStation, Enix announced in January 1997 that it would release games for both Nintendo and Sony consoles. This caused a significant rise in stock for both Enix and Sony. By November 1999, Enix was listed in the Tokyo Stock Exchange's 1st section, indicating it as a "large company."

In June 2001, Enix expressed interest in partnering with both Square and Namco in online ventures to deal with mounting development costs. That same month, Enix invested in the company Game Arts, acquiring ¥99.2 billion worth of stock shares in order to publish the latter's Grandia series. Despite Enix's profound advertisement of Dragon Quest VII in 1999, the game was delayed numerous times. The game's sales were ultimately good, but its success did not contribute to the fiscal year 1999, cutting the company's previous profit-to-sales ratio in half and dropping its stock value by 40% in the early 2000. Enix was further hurt by a delay of Dragon Warrior Monsters 2 in Japan in 2001, dropping its first-half 2001 fiscal year profit by 89.71%.

Enix's competitor Square also suffered financially in 2001, mainly from the box office failure of its feature film Final Fantasy: The Spirits Within. This made Enix hesitant to join with the company. However, it was announced on November 26, 2002 that the two companies would merge the following year in order to mutually decrease development costs and to compete with foreign developers. The merge was delayed until April 1, 2003, when Enix merged with Square, and the surviving entity became the modern-day company Square Enix. The merger between Enix and Square was apparently in consideration since at least 2000.

From 1983 to 1993, Enix published games for Japanese home computers including the NEC PC-8801, MSX, Sharp X68000, and FM-7. Beginning on the Famicom, Enix published the very successful Dragon Quest series, which, after the formation of Square Enix, had already sold over 35 million copies worldwide. Although the first few titles were developed by Chunsoft, other companies would also develop main installments, spin-offs, and remakes for the series including Heartbeat, ArtePiazza, and TOSE. The Dragon Quest franchise would carry over as one of Square Enix's most important assets. Other notable franchises published by Enix include the acclaimed Star Ocean and Valkyrie Profile series by tri-Ace, both of which would also continue with Square Enix. The company Quintet developed several role-playing games for Enix such as ActRaiser, Robotrek, Soul Blazer, Illusion of Gaia, and Terranigma for the Super Nintendo.

Enix America Corporation was the corporation's first American localization subsidiary. It was organized after the release of Dragon Warrior by Nintendo of America in 1989. The subsidiary came into existence in 1990, but closed in November 1995 when the parent company decided to no longer release products in North America. One of the games they published, King Arthur & the Knights of Justice, was Enix's first and only North America exclusive game.

Digital Entertainment Academy Co., Ltd. was established as a partially owned subsidiary in 1991. Originally called Toshima Ku Hokkaido University, the school was founded to teach game development. As of April 2008, it is funded by 20 gaming corporations, including Square Enix.

Enix America, Inc., Enix's last American localization subsidiary, was organized in 1999 after the release of Dragon Warrior Monsters through a joint venture with Eidos. Paul Handelman, who was part of Enix America Corporation's staff, returned to lead Enix America, Inc. as President. The corporation was in existence until 2003, ceasing to exist after the merger with Square Co., Ltd

Square Enix Webstar Network Technology (Beijing) Co., Ltd. was a company formed between Enix and Mauritius Webstar Inc. in 2001 to develop online and mobile phone games in China and, later, other parts of Asia. One of the products includes the MMORPG Cross Gate. The subsidiary was carried over after the merger between Square and Enix, but was dissolved in 2005 after the establishment of Square Enix China.

The PHOENIX enemy type in Star Ocean: The Second Story has parts of its body colored the same green tone as the company logo, as well as having the logo on its tail. Also, a slightly different colored version of the monster serves as a boss in the game, called XINE (renamed Zinae in Second Evolution). Curiously, the creature has been used in other media for some time, giving it some status as one of Enix's mascots like Square's Chocobo.