Anamnesis -The Beacon of Hope- novel
Eldram (エルドラム, Erudoramu?) is a supporting character and antagonist from Star Ocean: Anamnesis. The dictator of planet Levarance, he is responsible for the enforcement of Operation: Frost in order to contain the Devil's Plague.

At some point, they install pulse towers on Maere, Esperance, Dvaleor, Berbent and Viret.

The latest is Farbrooke, where Eldram secretly strikes a deal with the guerrilla leaders that oppose the government. The rebels agree to the deal: they are to build the tower and mine the rare metals it will produce in exchange for money. He personally oversees the tower's construction on Farbrooke, which is interrupted when intruders attack the place and force the guerrilla on their headquarters to surrender. Eldram thus meets the Captain and Evelysse, and recognizes that they have more brains than Farbrooke's government lapdogs. He says it will be satisfying to squash them and leaves.

They track him to the guerrilla's spacecraft-housing structure. While the rebels scatter, Eldram awaits the Captain and Evelysse, and asks why they take umbrage with The Purge. Evelysse declares that he and his organization will pay for the crimes they committed, but now aware of their motive, Eldram simply transports to his mothership on orbit.

Eldram has a haughty personality, insulting those actively oppose him as "pests" and "maggots" but also dismissing the threat they pose. However, his cold demeanor and disregard for other poeple may, in fact, be simply part of the 'dictator' persona he assumed to take control of Levarance.

According to Verda, Eldram is very good at sewing and has nurturing personality that she likens to that of a mother's. 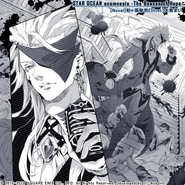 In -The Beacon of Hope- Chapter 6 (web edition).