I told you I was Death incarnate.

Arumat P. Thanatos (エイルマット・Ｐ・タナトス, Eirumatto P. Tanatosu?) is a major character in Star Ocean: The Last Hope. He is an Eldarian soldier of great fightning ability who survived the destruction of his squadron at the hands of the enigmatic group known as Phantoms.

Arumat P. Thanatos (The Last Hope)
An Eldarian soldier, blessed with extraordinary fighting ability even by Eldarian standards. A breakdown in the structure of his muscle cells has presented him with an ultimatum: give up his current body, or die an early death. Unsurprisingly, he has chosen to live out what time he has left as a fighter, partly as redemption for the men he has lost along the way. His squadron was wiped out after being attacked by an unknown enemy in Eldarian space, leaving him as the sole survivor, but the injuries he sustained turned his muscular system into a ticking time bomb. (Eldar does not engage in interplanetary war, but this attack kicked off the Eldarian military buildup that continues to this day.) Unafraid of death, he lives a self-destructive life in his constant quest to push himself forward. Since meeting Crowe and Edge, however, he has begun to re-evaluate himself. Never taking center stage, he plays a support role in their journey, although that may be born out of pure stubbornness more than anything else.
DOB: April 24 (Taurus) - Age: 26

Arumat is a member of the Eldarian military, blessed with extraordinary fighting ability even by Eldarian standards. In S.D. 10, his squadron is wiped out after being attacked by an unknown enemy in Eldarian space, leaving him as the sole survivor. However, the injuries he sustains cause a breakdown in the structure of his muscle cells, likely to lead to an early death. He meets Crowe F. Almedio and Edge Maverick, after which he began to re-evaluate his self-destructive ways.

Arumat plays a support role in their journey, and wields a giant laser scythe in battle. During the ending, he and Myuria hold Reimi back from jumping to Edge. He is strong enough to hold her back with one hand without having her budge.

In Arumat's ending, which is obtained by Arumat having sufficient AR toward Edge, Arumat is on a desert planet, where he finds an Earthling soldier. He asks the soldier if he is an Earthling, and the soldier nervously nods. Arumat says he's had his "share of experience with Earthlings" before hearing another Earthling soldier scream in the distance. Arumat murmurs to himself about how "their" behavior has "rubbed off on" him, and runs off to the other soldier's aid.

In Star Ocean: The Last Hope, Arumat is a something of a replacement for Faize Sheifa Beleth, as he is competent in both fighting and Major Destructive symbology. However, he actually favors close-range physical attacks with his scythe. Like Faize, Arumat is also skilled in Alchemy skill for Item Creation, and is able to come up with recipes that Faize cannot.

He also makes a playable appearance in Star Ocean: Anamnesis, wherein he has two variants: "Armumat", and "Butler Arumat".

Arumat has appeared in Star Ocean: The Last Hope and Star Ocean: Anamnesis as a voiced role. 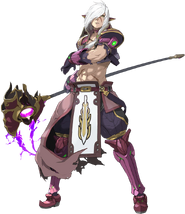 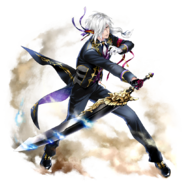 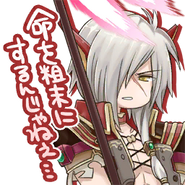 Stamp:"Don't throw your life away..." 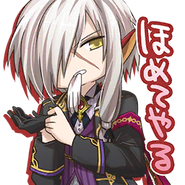 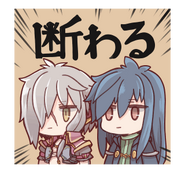