Till the End of Time manga

The only point is at the end of my sword, fool!

Albel Nox (アルベル・ノックス, Aruberu Nokkusu?) is a main character from Star Ocean: Till the End of Time and an Elicoorian swordsman from the Kingdom of Airyglyph. Also known by his title of Albel the Wicked (歪のアルベル, Hizumi no Aruberu?) for his cruelty, he is the leader of the Black Brigade, one of three branches of the Glyphian military forces.

Birthplace: The Kingdom of Airyglyph, Elicoor II
Birthday: December 31st, 748 S.D.
Captain of the "Black Brigade"—one of the three military factions in the Kingdom of Airyglyph. He was involved in the war against the neighboring Kingdom of Aquaria in the 700s (S.D.)
Albel is a firm believer that strength is justice, and his relentless pursuit of power has earned him the name "Albel the Wicked."
While he initially saw Fayt and his companions simply as worthy opponents, he has come to acknowledge their remarkable skill and is even known to take their opinions into consideration.

Birthplace: The Kingdom of Airyglyph, Elicoor II
Birthday: December 31st, 748 S.D.
A man who participated in the war between the military superpower of Airyglyph and neighboring Aquaria in the 700s (S.D.) as Captain of the "Black Brigade", one of the three great leaders of Airyglyph.
Though it is often hidden by his moods and lust for power, he shows flashes of calm rationality in battlefield factor analysis.
The king of Airyglyph rates his abilities highly, and views Albel as a prospect for future leadership.

In S.D. 748, Albel was born to an unnamed woman and Glou Nox. Albel's father was the captain of the Dragon Brigade, the wielder of the Sword of the Crimson Scourge, and a close supporter of King Airyglyph XIII's reformation.

Circa S.D. 739, at age 15, following in his father's footsteps, Albel wanted to become a knight and join the Dragon Brigade. However, during the Accession of the Flame ceremony, he was unable to release his own individual feelings and commune with the spirit of the Air Dragon that tested him. The dragons breathed their fury upon him. Albel would have died for his hubris, but his father shielded him with his own body and bore the brunt of the flames. Glou died, while Albel survived but lost his left arm.

As Glou was good friends with Count Woltar, the count came to look after the young Albel. Due to his talents in swordsmanship and one-on-one combat, Albel began to be compared with Duke Vox and to be rated rather highly by the king himself. Despite his young age, Albel was named the leader of the Black Brigade, and the commanding officer of Shelby and others.

Albel first encounters Fayt Leingod, Nel Zelpher, and Cliff Fittir at Airyglyph's Kirlsa Training Facility. However, he only mocks the group before deciding to leave without a fight and report the defeat of his political rival in the Airyglyph military.

Albel is next seen in the Bequerel Mountain Path, where he does in fact attack Fayt, Nel, and Cliff. After he is defeated, Fayt decides to spare his life with the same excuse used by Albel at the training facility ("Easy wins have never been my style"). Unfortunately for Albel, after letting the valuable engineer Fayt escape twice, Duke Vox claims that his repeated failure was because Albel was actually a traitor, rather than an incompetent. The ploy works, and Albel is imprisoned by the King of Airyglyph.

After the Vendeeni attack, Albel is pardoned and sent with Fayt, Cliff, Nel, and Maria Traydor's group as a representative of Airyglyph in the taming of The Marquis, the King of Dragons. If Fayt is sufficiently "nice" to Albel in a certain event, which is when you spend the night in Peterny before going to Urssa Lava Caves watch the event and when Albel asks if you hate him, you say no. Albel is one of the three characters from Elicoor II who may accompany Fayt on his initial journey to Moonbase and beyond, saying that he needed to find excitement somewhere else since the war is over and Vox is dead. If Albel is not acquired then, he may be recruited upon the return to Elicoor II considerably later in the game if Peppita Rossetti did not join Fayt's band. But in this case, Fayt must fight Albel one on one in order to recruit him. Woltar will say that Albel is in the caves where the group fought Crossel.

Either way that Albel is recruited, he rather "forces" himself into the group. If he is defeated at the Urssa Lava Caves, he seems to try and force himself into the group, automatically saying "All right fools. Let's go." before the others decide whether they want Albel or not. He can be accepted or rejected this time, but if Fayt defeats Albel a second time after rejecting him the first time, he truly forces himself into joining Fayt's group and becomes permanent, whether the player wants him or not.

This article or section is a stub. You can help the Star Ocean Wiki by expanding it.
Spoilers end here.

Albel wears a clawed gauntlet over his left arm, severely burned as a result of a failed attempt at a partnership with an air dragon. He prefers to take no prisoners and leave no survivors in battle, a lack of mercy that perhaps explains his nickname of "the Wicked."

His father's death caused Albel to have survivor's guilt, as he thinks that he did not deserve to be saved as he had failed. It has been hypothesized that because of a fear that someone will sacrifice themselves to save him again, he keeps others at arm's length, so that he (and they) won't get hurt again. Regardless, Albel is socially inept; he speaks little, and that which he says is often derogatory or threatening in nature, and he often refers to others as "maggots," "worms," and "fools." Given Albel's propensity for verbal cruelty, the men that serve under him vastly prefer his second-in-command, Shelby.

In Star Ocean: Till the End of Time, Albel is fought as a boss at the Bequerel Mountain Path. He later joins the party before the journey to the Urssa Lava Caves or during the return to Elicoor II after the events at the Moonbase. He uses katanas in battle and has decent attacking power, but his defense is relatively lacking since he can only equip chain mail armor.

In Star Ocean: Anamnesis, he is also a playable character and currently has three variants: "Albel", "Dark Albel" and "Were-Albel".

Albel has two themes associated with him. The track that plays when the party first meets Albel and during his boss encounters is called "Malicious Fingers". In the first meeting with Albel in Kirlsa Training Facility, after Shelby's defeat, the track played is "The Divine Spirit of Language", which also plays during the endgame boss battle at the Urssa Cave Temple.

Till the End of Time

Fourth outfit.
Add a photo to this gallery

Albel (SR).
Add a photo to this gallery 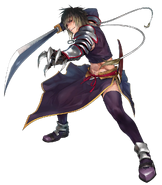 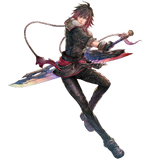 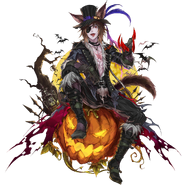 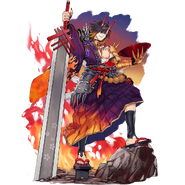 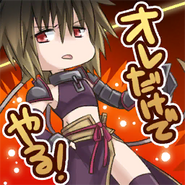 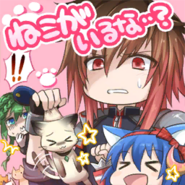 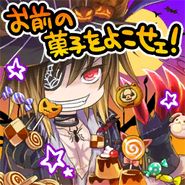 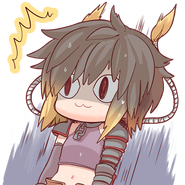 iMessage sticker.
Add a photo to this gallery